Just in case you’re not interested in my reflection on the previous Fortnightly Focus, here’s the topic for the next two weeks:

We often think about routines when planning for our YL and VYL classes.  What routines can we establish with higher levels and older learners?

My previous Fortnightly Focus was a proactive engagement with the course before it started and the focus was, “What am I doing in preparation for the new term?”

One of my personal PD goals for this year is to work on establishing a stronger home-school connection with my VYLs as I’ll be teaching four groups this year and I want to look at how they can share the lesson’s resources with their families, as well as developing the role of English outside the classroom.  I’ve created a website and bought some finger puppets who will be the class mascots.  My plan is that to start with, I’ll build the learners’ relationships with the puppets (e.g. in yesterday’s first lesson they each drew a picture of themselves with their class mascot) and by engaging them in the puppets’ lives (by taking photos of the puppets in familiar places), so that in the near future, they’ll take the puppets home and create their own adventures with them in English which we’ll then share in class.  Obviously it’s early days yet and it’s not something I’ve ever tried to do before, so I’ll update my thoughts on the process and outcomes here!

And, on a techy front, I’ve gone Triptico crazy with my classes! 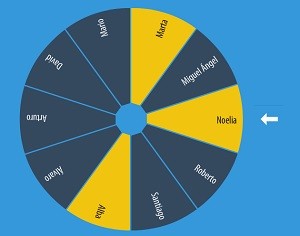 I’ve got Random Name Generators (Text Spinners) for each class; I’ve created a variety of activities with Word Magnets for the PET and FCE groups (such as matching dependent prepositions); and I’ve also created Text Spinner activities for the Movers group to practise frequent language, such as clothes, prepositions of place and the weather.

And talking of Movers, I also downloaded the Cambridge Picture Books for both Movers and Starters – you can project them and use them for team games, e.g. using fly swatters to identify parts of the picture or teams can take it in turns to make a sentence about the picture without repeating a previous statement.

And finally, as always, I’ve had a good sort through of last year’s material to see what I might use again this year and what I can put back on the shelf for the future!

2 thoughts on “Fortnightly Focus #2 – preparation for the new course”