Affect in the EFL classroom

Some more wise words from my colleague, Jill: “Lower the filter, not the bar.”

In our Professional Development Meeting on Friday, one of my colleagues, Chris, gave a fabulous session on ELT Methodologies.  The session was wonderfully presented as he modelled a number of techniques from various approaches/methods which most of us are familiar with from our own teaching experiences, although we may not be aware of where they originally come from.  We then had a brief look at some of the major approaches and methods in the area of ELT and finally looked at some statements regarding our own teaching and considered which methodologies the statements might relate to.

One of the statements got Jill and I talking about lowering the affective filter, which is often associated with Suggestopedia and we talked about how a teacher’s personality can go a long way in making learners feel comfortable, especially around making mistakes.  I praised her for her diligence in expecting and getting the most from learners and said how I felt she always managed to do so without making them feel uncomfortable and from there comes the quote of the day, “Lower the filter, not the bar.”

A few weeks ago, I posted about a talk I was going to be giving at ACEIA Málaga with some thoughts on where the talk was coming from.  I realised as well when writing the session, that part of my reticence for not getting more from my learners is because I know that I hate feeling put-on-the-spot and so I’m very understanding of my learners when they communictae their point to me whereas I should push them to be more correct.  It’s a teaching quality which I really admire in one of my colleagues, Jill – she has such patience when talking to learners – not patience in understanding them, but in encouraging them and pushing them to really use the English they can and should be using. 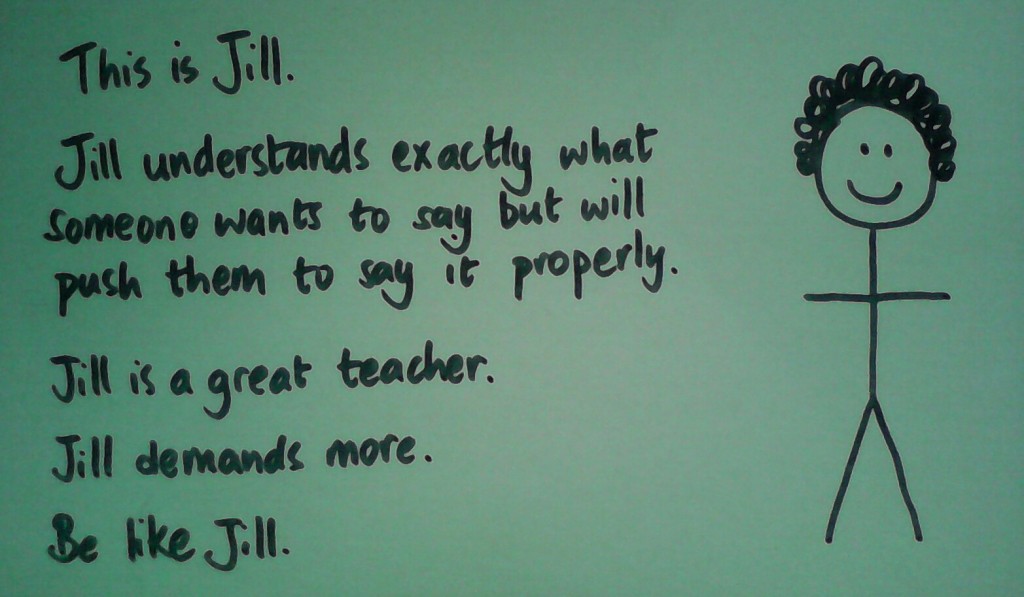 In all honesty, this is a post of procrastination as I’m currently writing reports for my learners and have hit a bit of a wall.  Coffee is next on the list of things-to-do-in-the-meantime.

By “identify”, I don’t mean knowing who’s who – though I did have a startling, and hopefully somewhat exaggerated, conversation with a teacher from another school on the topic – but rather reflect on that individuals’ strengths and weaknesses and bring that together to produce a meaningful, useful report. Some learners don’t stand out as being particularly strong or weak in any area and we run the risk of sending home a banal report with phrases such as “you’re doing well” or “good work this term”, without offering any honest reflection on that individual’s abilities or meaningful advice on how to improve.

Though it’s a pain-in-the-behind when you’re sitting in on a Sunday wading through reports (partly through a lack of organisation hence not getting them done earlier in the week), it really is worth the effort to write a personalised, heartfelt report.

A focus for next year is how I can make my classes less teacher-centred.  It’s something I’ve been thinking about this year, especially around the adult GESE group which I had as I found that they were perfectly capable of extended, interactive exchanges in pairs, but that they were less likely to interact as naturally when conversing with me (irrespective of it being in a one-on-one situation or in a whole-group setting).

I like this quote from an article in The Guardian with a tip for Demanding High:

The teacher gets students to listen and comment on each other’s answers, rather than designating any as correct or incorrect herself, at least until it is useful to do so.

It speaks to me on a number of levels: the idea of moving away from a teacher-centred classroom and passing more responsibility to learners for response and extension, the effect of over-affect or perhaps the advantage of distancing myself from the conversation and finally, the importance of focused, appropriate error correction.

Harry Potter bombs in B1 class 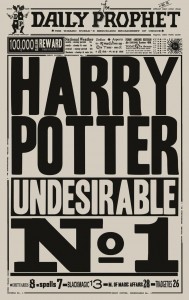 I had a less than stimulating start to the week!  On a Monday morning I have a B1.1 group at 10.30 and there are a wonderful group and generally quite enthusiastic and talkative.  I like to put some discussion questions on the board before they arrive for three reasons:

This week there were some questions on the board with the title Harry Potter as we would later be doing a reading about JK Rowling.  The learners’ response to the initial questions was far less positive than usual as there were no Harry Potter fans in the class and in fact most said they thought the saga was unrealistic and silly (allowed a great teachable moment of some negative adjectives!).

I feel as though this initial stage then set up the atmosphere for the rest of the lesson.  In later discussions, the learners seemed less animated than usual which made me wonder whether they had been negatively affected by an initial phase which was so uninteresting for them.