It’s been a busy few months – doing webinars for Active Language, tutoring on the OxfordTEFL DipTESOL course, setting up an online Young Learners course for Active and prepping my mini-plenary for the Innovate ELT conference which took place this weekend. As it took me ages to prepare, I’m putting it on the blog for posterity!

I’d like to start by explaining a little about where this talk and the title came from. I was originally going to give a mini-plenary at a TEFL del Sur conference in March. TEFL del Sur is a teachers’ organisation which I’m very proud to have cofounded (I’ll come back to that later). As a small, local organisation, we tend to get local speakers – people like Ceri Jones, Dan Barber, Chris Roland and Michelle Worgan…and me, and it tends to be the same people who often speak at our events and so we wanted to try and encourage more people to get involved and so I was going to do this mini-plenary at our event in March to try to boost our speaker pool. I was going to start with a little survey type thing using Mentimeter with sentences such as “I currently teach Cambridge prep classes” or “I currently teach VYLs” and so on, to lead on to reveal that I actually currently did none of that but often do practical sessions with tips for these various different classes.

And the fact is, I’m a bit of a conference junkie and I do love speaking and attending events, but recently, I’ve definitely been feeling like a lot of the practical ideas I’ve been sharing are more based in theory (as in, I believe this would work) rather than actual practice.

And this is one aspect of the imposter phenomenon – this feeling that you’re a bit of a fraud and at some point somebody’s going to turn around and call you out on it. For me, that fear manifests itself in dreams of being heckled by the audience during a talk when someone says, “You haven’t actually tried this with your own students though, have you?”

My anxiety dreams around this mini-plenary have largely been about turning up without my notes and a weird, socially-distanced hybrid event where I had to deliver my talk to you whilst a room full of people in front of me watched, wearing masks. However as well, when I started to research more about the topic of the imposter phenomenon, I even began to question whether I was an imposter, as I don’t suffer from the debilitating effects which others can experience and I started to feel like a bit of a fraud for deciding to talk about it. But one thing I read is that it’s more frequently called the imposter phenomenon or imposterism than the imposter syndrome for that reason. Organisational psychologist Rob Yeung wrote:

…syndrome implies that people either have it or not, whereas the reality is that such thoughts and feelings of imposterism tend to affect people on a spectrum.

And there is more to it than just this feeling of being found out. Dr Valerie Young who’s an expert on the topic, has identified five types of ‘imposter’. Have a listen and see if you can relate to any (or all) of them. 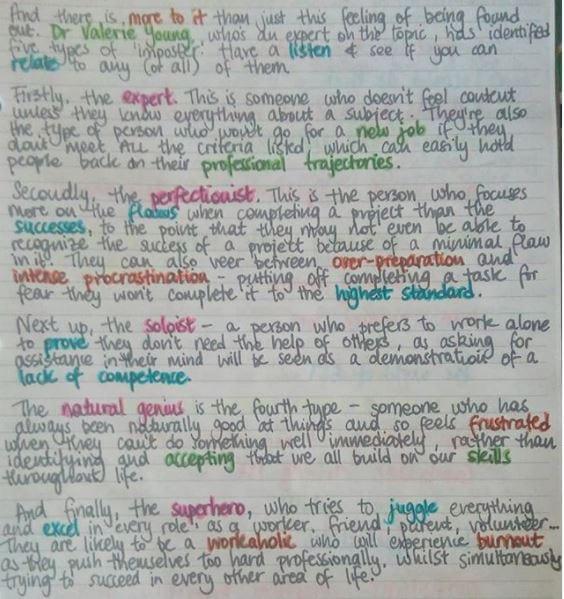 Firstly, the expert. This is someone who doesn’t feel content until they know everything about a subject. They’re also the type of person who won’t go for a new job if they don’t meet ALL the criteria listed, which is something which can hold people back in their professional trajectories.

Secondly, the perfectionist. This is the person who focuses more on their flaws when completing a project than their successes to the point that they may not even be able to see the success of a project because of a minimal flaw in it. They can also veer between over-preparation and intense procrastination – putting off completing a task as they fear they won’t complete it to the highest standard.

Next up, the soloist – a person who prefers to work alone so they can show they don’t need the help of others for fear that asking for assistance will be seen as incompetence.

The natural genius is the fourth type – someone who has always been naturally good at things and so feels frustrated when they can’t do something well immediately, rather than identifying that we all build on our skills throughout life.

And finally, the superhero, who tries to juggle everything and excel in every role: as a worker, friend, parent, volunteer. They are likely to be a workaholic who will experience burnout as they push themselves too hard professionally, whilst simultaneously trying to succeed in every other area of life.

I was chatting to a friend about the imposterism we can all feel in this globalized world: the feeling that we’re not doing enough to combat the various social, economic and environmental injustices that are occurring around us, the feeling that now we have access to news and information from around the world that we should know more about them all, know everything about them all, and take action. Also, the feeling that each and every one of our decisions should be environmentally sustainable and the terrible guilt we feel when we buy something in plastic packaging with the realisation that we’re contributing to the problem. It’s great that there are so many talks this weekend to help us become a part of the solution but I’d like to hope you go away with a sense of ‘I could do that’ rather than feelings of ‘I should be doing so much more!’ and an anxiety-fuelled determination to single-handedly change the world. 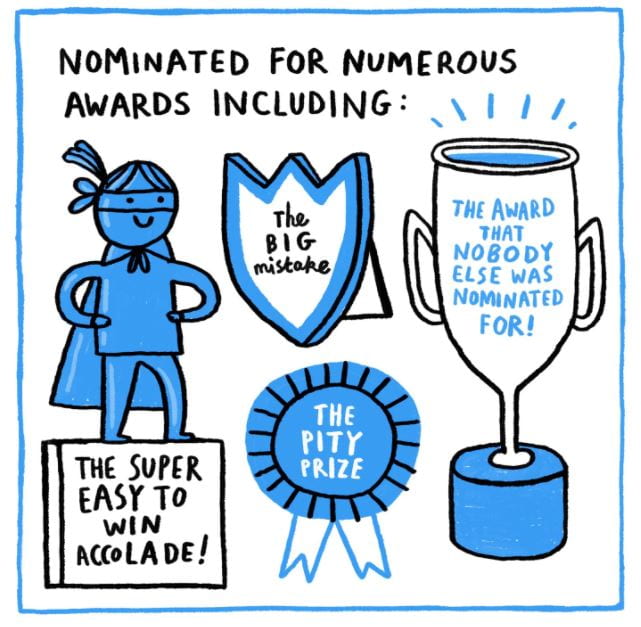 We aren’t superheroes and in fact, (geek alert), many of our favourites in the Marvel and DC Universes suffer from feelings of imposterism, including Spiderman and Captain Marvel.

Incredibly though, it’s thought that about 70% of people will experience a feeling of imposterism at some point in their lives. Whilst it was originally identified in the late 1970s by Dr. Pauline Rose Clance and Dr. Suzanne Imes as a syndrome affecting high-achieving women, over the years, research has shown that it affects men as much as women, high-achievers as much as average Joes and, listening to those five types of imposter, I’d be very surprised if you couldn’t identify with at least one of them at some point in your life.

One more point to add is that I think in the world of ELT, we’re particularly likely to get a sense of imposterism because – ‘Jack of all trades, master of none’ – we are so often thrown into a new environment: the teacher who has years of experience with Cambridge exams may feel hesitant when they start teaching a Trinity ISE class; the early-years teacher might feel nervous when they suddenly face a class of adults for their DipTESOL teaching practice; teachers who have worked in mainstream education in their own country for years often get that self-doubt when they step into an ELT classroom for the first time and, of course, it would be an oversight not to mention the concerns many competent, experienced teachers faced when they were thrown into the world of online teaching earlier this year.

So, what can we do about it?

Firstly, identify if you are suffering from the imposter phenomenon and, if you think it’s influencing you negatively – stopping you from going for new opportunities, having an impact on your work-life balance or affecting your mental health – seek help. Talk to a trusted friend or colleague, or look at professional help. However, unfortunately, admitting you feel like an imposter won’t stop you from feeling like an imposter. Dealing with imposterism starts with you because, as psychotherapist Nathaniel Branden says:

To attain ‘success’ without attaining positive self-esteem is to be condemned to feeling like an imposter anxiously awaiting exposure.

So something more concrete you can do is identify and catalogue your successes. We are our own worst enemy and we all know that for the twenty, fifty, one hundred positive comments we get, that one bad comment will keep us awake. Tip the scales in your favour and force yourself to outweigh the negative with the positive by documenting all your achievements.

Thirdly, as I said before, we learn through experience and we all work hard to improve our skills, albeit with the phrase ‘fake it til you make it’ ringing loudly in our ears. So, step out of your comfort zone every once in a while: take on an IELTS class, write a guest blogpost, lead a CPD session at your school, submit a proposal for a conference (another plug there for TEFL del Sur – we’re a very welcoming bunch!). You could even start your own local organisation – as any good imposter knows, “If I can do it, anyone can!”

But seriously, the last piece of advice? Own your successes. Now, this can be tricky as you don’t want to sound boastful and many of us don’t like to feel like we’re in the spotlight so, as Dr Young says, we will often “diminish or discount obvious evidence of our abilities”. So, although it has less impact during an online conference, I’d like you to take ten seconds to complete the sentence I’m proud… and when I count to three, say what you’re proud of.

Big yourself up this weekend – hopefully everyone you talk to in the Zoom Garden will have listened to this talk and will know that you aren’t bragging! You’re surrounded by people with a passion for ELT who will be happy to share in your successes.

1 thoughts on “The imposter phenomenon”