Great timing as today in our bi-weekly PDM we reviewed the previous session which had been all about getting to grips with phonology and reflected on what we had been doing in our classes since then.  I’m happy to say I have been slightly more proactive with pron (pron there rather than phonology because I like the alliteration of ‘proactive pron’) – for example, the 9-year-olds the other day looked at -ed endings and we did an awareness-raising activity to see if they could hear the difference between sentences said in the present and the past, e.g I watch TV vs I watched TV. (FYI: They were generally good at noticing the difference, but aren’t yet fully comfortable producing the regular past, so there’s still a lot of Spanishified play-ed and watch-ed.)

This also came off the back of a chat I was having with some colleagues about my 5-year-olds who are really struggling to produce ‘s’ at the end of words despite heavy drilling and I also felt as though they weren’t aware of the sound when I said the sentence either, so we’re working on that and doing some back-chaining as I found that with the sentence, “He’s got long legs” the ‘s’ sounds got lost at one point or the other!  This also gives us a chance to work on producing a more clipped ‘t’ at the end of got – so we’re steadily moving away from /hi: gɒ lɒnx lex/ with the final /x/ sounding like a true Scotsman pronuncing the ‘ch’ in loch.

It’s interesting to do a variety of group and individual drilling in the class as it really does give you the opportunity to think about the individual learners.  Some of my VYLS can parrot back wonderful sentences with clear sounds and the correct intonation, whereas others struggle both with individual phonemes and those supra-segmental features such as word or sentence stress.  I wonder how it correlates to their speech development in their own language (as Russ Mayne commented the other day on Twitter): 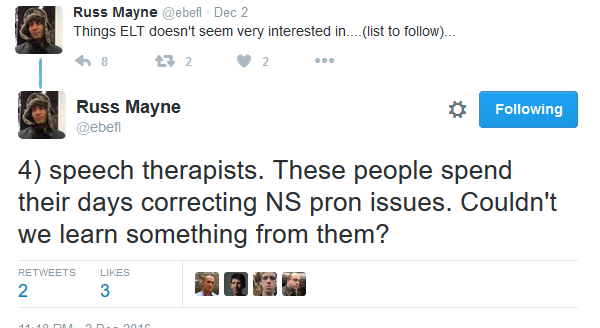 I would still like to do more proactive pron with my teen and adult groups but as we had two wonderful national holidays last week, we didn’t have class so I wasn’t as phonologically active as I may have otherwise been.  However, in our end-of-term tutorial yesterday, one of the adult learners said she’d like to do more work on the phonemic alphabet to become more familiar with the different phonemes and work on tricky sounds at a more basic level – minimal pairs, ahoy!

Going to have a Fortnightly Focus break over the Christmas holidays, which will give me some time to reflect on the year so far and start thinking about how to make the next term better.  How happy are you with your start to the year?  Any teaching-related new year resolutions?

Pronunciation – the Cinderella of Language Teaching

A little anecdote to start this off, as my head is trying to work out exactly where this post is going…

I’ve been teaching Trinity preparation courses for a couple of years in a centre where I’m also the coordinator of the classes, so I know quite a lot of the learners (who are all adults and teachers themselves) either through having taught them, or having spoken to them about exams or popped into their classes to talk to their teachers.  This year, one of the classes is being taught by an American and (seriously) a couple of the learners asked me whether they would have problems in their exam (i.e. be marked down) if they spoke with an American accent!

One of the ideas behind the native=best idea is that native speakers are better placed to model the language being taught and, more often than not, this boils down to accent.  But what is a “native” speaker accent?  Think about how the RP pronunciation of ‘bus’ differs to how someone from Yorkshire might say the word, or how someone from Glasgow might say ‘book’, or how a Texan might say ‘twenty’.  There’s a number of fabulous videos on Youtube in which people speak with different regional accents and although most online dictionaries limit phonetic spellings to RP or a standard American accent, Pearson continue to produce revised editions of their Pronunciation Dictionary which gives the most frequently used alternatives.

An aspect of teaching different accents is the use of the phonemic chart as, whilst versions of the chart exist, the one most commonly used in Europe contains the sounds associated with an RP accent, meaning that some teachers struggle to transcribe their own variations of words.  Another aspect of the chart which often scares teachers is that their learners will be more familiar with it than they are!  This is almost certainly true for teachers whose mother tongue is English, as they will have learnt to identify different vowels sounds through practice and, although have probably noticed the weird squiggly letters in the dictionary, have never needed to engage with phonetics.

I recommend reading Adrian Underhill’s article on the Humanising Language Teaching blog, Pronunciation: the Cinderella of Language Teaching and have a listen to The TEFL Show’s podcasts, hosted by Marek Kiczkowiak and Robert McCaul, on teaching vowel and consonant sounds as well as the episode “Which pronunciation model should we teach?”

Category: My thoughts | 1 Comment on Pronunciation – the Cinderella of Language Teaching

I’m having a bit of a tidy-up and came across the little book of useful notes I made to help me revise for my Diploma exam.  There were a few pages dedicated to problems which Spanish speakers can have:

There is a fabulous section in the book Learner English (Michael Swan and Bernard Smith) which has further information on speakers of Spanish and a wide variety of other languages.

During a speaking activity the other day, I heard one of my B1 adults say /ʃaɪld/. This isn’t uncommon in our corner of Andalucía, where the /tʃ/ phoneme is often pronounced /ʃ/ and in fact during my Diploma, I chose that specific problem for my phonology presentation. Seeing a teachable moment, I quickly jotted down some minimal pairs with those sounds on the board.
We drilled the words individually and some students commented on how difficult they found it to differentiate between the two sounds.
I then asked them to write a sentence in pairs using as many of the words as possible and you can see their ideas in the picture below.
We then practised the sentences as a class and in pairs – and even I found it difficult to say them at speed! 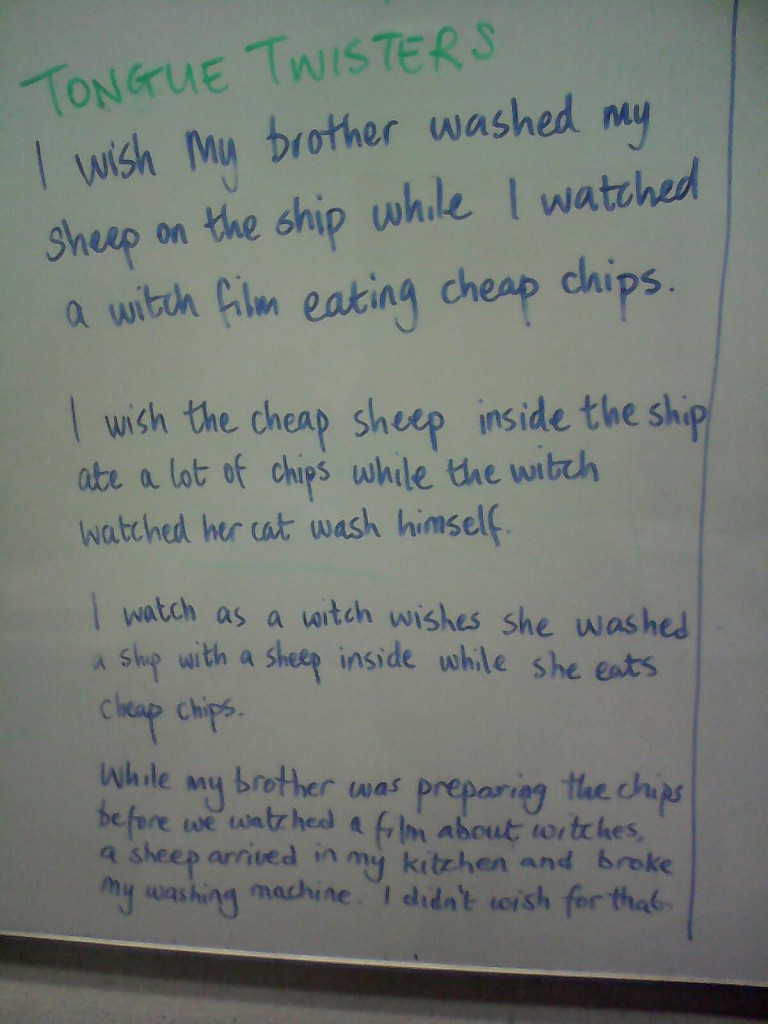 I’ve recently been doing some work with phonology with my 10-year-olds, trying to familiarise them with the phonetic alphabet.  A quick and easy way to raise awareness of English sounds is with a discrimination activity:

This activity is especially useful to highlight the spelling-sound difference, for example, /dʒ / in jeans and genius or /i:/ in beach, green or people.