Eeeep, I’ll admit it – I’ve still not got my routine sorted in terms of when lessons get planned and so on Thursday, I had focussed far more on my YLs and twenty minutes before an afternoon of classes suddenly thought, “Aaah – what am I doing with my PET group?!” Unfortunately, teaching two groups of little people and another YLs class during the afternoon, I didn’t have much time to plan whilst lessons were going on and five minutes before the class was due to start, still didn’t have it quite clear in my head. So, here’s a materials-light (possibly even -free) lesson for learners preparing for the Cambridge PET exam.

Start with StarWord – an easy game which activates schemata.
Draw a star on the board. Explain that you’re thinking of a word related to the topic of (At the beach). Give them a minute to brainstorm in pairs.
Nominate a learner to say a word (then, as was the case on Thursday, have a moment of panic when they get your word – towel – in the first guess and you realise you can’t think of anything else at the beach. Congratulate them on being so clever, writing their word below the star to show they got it correct, then recover with ‘bikini’ in mind and start again!).
The star on the board represents where your word lies alphabetically, so as learners guess, add their words to the board in the correct position (before/after, closer/further away).

**If I was doing this class with a group of teenage learners I was more familiar with, I’d do this stage next. As it was only our second lesson, I decided to do this guided visualisation after the speaking exam practice stage.** 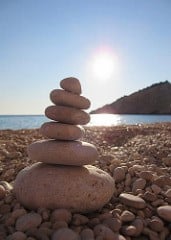 Tell the group to close their eyes and do a guided visualisation of being on the beach. Here are some questions to put to them…
Are you on a beach you’ve been to before, or are you imagining a new beach?
Are you alone? Are you with friends or family?
What can you see around you? Are there children playing? Is the beach busy or empty?
What can you hear? Think about the sound of the sea – are the waves crashing on the shore or is it calm?
Can you smell anything?
Think about where you are – are you standing on the beach with the sand between your toes? Are you in the sea – is the water warm or refreshing? What’s the weather like – can you feel the sun on your skin?

In pairs, learners tell their partner about their beach – remind them to think about what they could see, hear, smell and feel. Then, as whole group feedback, ask each learner to tell you three things about their beach. This is a good moment for error collection/correction – a typical issue here in Spain being, “I was in the beach.”

Next, elicit three or four beaches which your learners may go to and ask them to work in pairs to think of an advantage and disadvantage of each. It can help to say that they can’t repeat the same information more than once and, if you wanted to add an extra level of challenge, you could say that they can’t use opposites to talk about different beaches, e.g. “An advantage of beach A is that it’s clean. A disadvantage of beach B is that it’s really dirty.”

Nominate learners and board their ideas – don’t limit yourself in feedback to just one advantage/disadvantage for each as it’s likely that pairs will have come up with different points for different beaches.

Then, as a bit of an aside, check their knowledge of the PET speaking exam and elicit timing, interactions and the different phases of the exam.

For the next stage, it may help to have some typical language for part 2 (the interactive phase) prepared on cards – phrases for making suggestions and agreeing/disagreeing, such as, “Why don’t we…?” or “I don’t think that’s a good idea, because…” If you have them prepared, hand out a set to each pair and ask them to divide them out; if you don’t have the cards ready, you can elicit this language from the group and board it.

Set the scene for part 2 of the speaking exam:
“You’ve decided to go to the beach this weekend. Talk together about the different beaches you could visit and decide which would be best. I’ll say that again…”
In pairs, learners discuss the topic, using the cards in their hand. This is another good opportunity to monitor and collect/correct errors.

**I now did the guided visualisation.**

Finally, set up a homework task to write a letter to a friend who is coming to visit your city/region and has sent a letter to ask your advice on which beach to visit.  Elicit the layout for writing a letter and word count.

Here are some other topics which could work with this plan:

*Being in the countryside. They could think of activities to do such as horse-riding or rock-climbing for the interactive and letter tasks 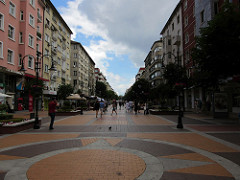 *Going shopping. They could think about different shopping areas in the town (for example locally for us there is a small shopping centre, an enormous shopping centre out of town, a department store or the high street).  For the letter task, they could respond to a friend about their shopping habits

*Learning languages.  For the interactive tasks they could think of advantages and disadvantages of the different ways people can learn languages (online, going to class, reading, audio classes, etc) and then for the letter task, give a friend advice on learning a new language

*The future. For the guided visualisation, you could talk them through their future job; then for the interactive task they could talk about possible summer jobs and in the letter task, either write a letter imagining a job they had in the previous summer or talk about their plans for their future career