Or actually not, in my case!  It’s Saturday but I woke up at 6.30 so I figured I may as well get up and do something useful with my time and blog about yesterday’s lesson.

A bit of background to the lesson itself: we’re just starting TP2 with the part-time TESOL trainees and so yesterday the tutors were teaching.  Although I always feel nervous when being observed on the course, I generally feel better at the start of TP2 as I’m more familiar with the learners.  As such, I’d planned yesterday’s lesson with the original B1 group in mind and they were, generally speaking, a strong B1 group.  Unfortunately, as I found out when I arrived at the school yesterday, only three of the previous group were continuing and I had five new learners that day.  As soon as they walked in, I knew the material would be incredibly challenging for them, especially as a couple felt more like A2 learners.  But, c’est la vie!  We did the tasks a little more slowly and stronger learners were able to support their peers well and although the material was challenging, the tasks associated were simple, as you’ll see below.

We did some initial chat around the three questions below and a collocations task from the book which also provided space for learners to personalise the language and gave me further opportunity to gauge their level.

Do you find it easy to get to sleep?

Are you a heavy or a light sleeper?

What do you do when you can’t sleep? 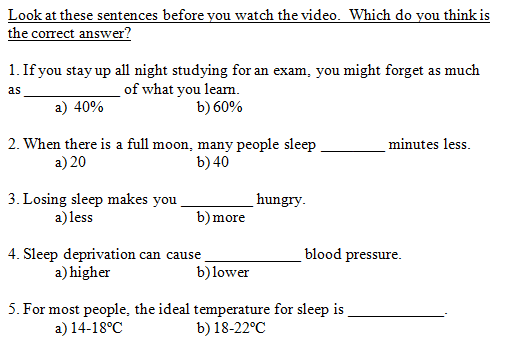 We did this prediction task before watching the video – the first time they watched, I asked them to check their predictions, we did a quick pair-check, then I asked them to watch again and then tell a partner what they found interesting or surprising about the video.  The text is fast, but the predictions task was simple and the answers for those statements were clearly given.

For the next stage, I’d done a little crowd-sourcing and asked my friends in the UK what time they go to bed and get up – I mapped their responses onto a chart and then got all the learners (and trainees) to add their times.  I pointed out that the difference in the times that people in the UK and Spain get up was fairly minimal and asked them to discuss in pairs why they thought Spanish people go to bed so much later. 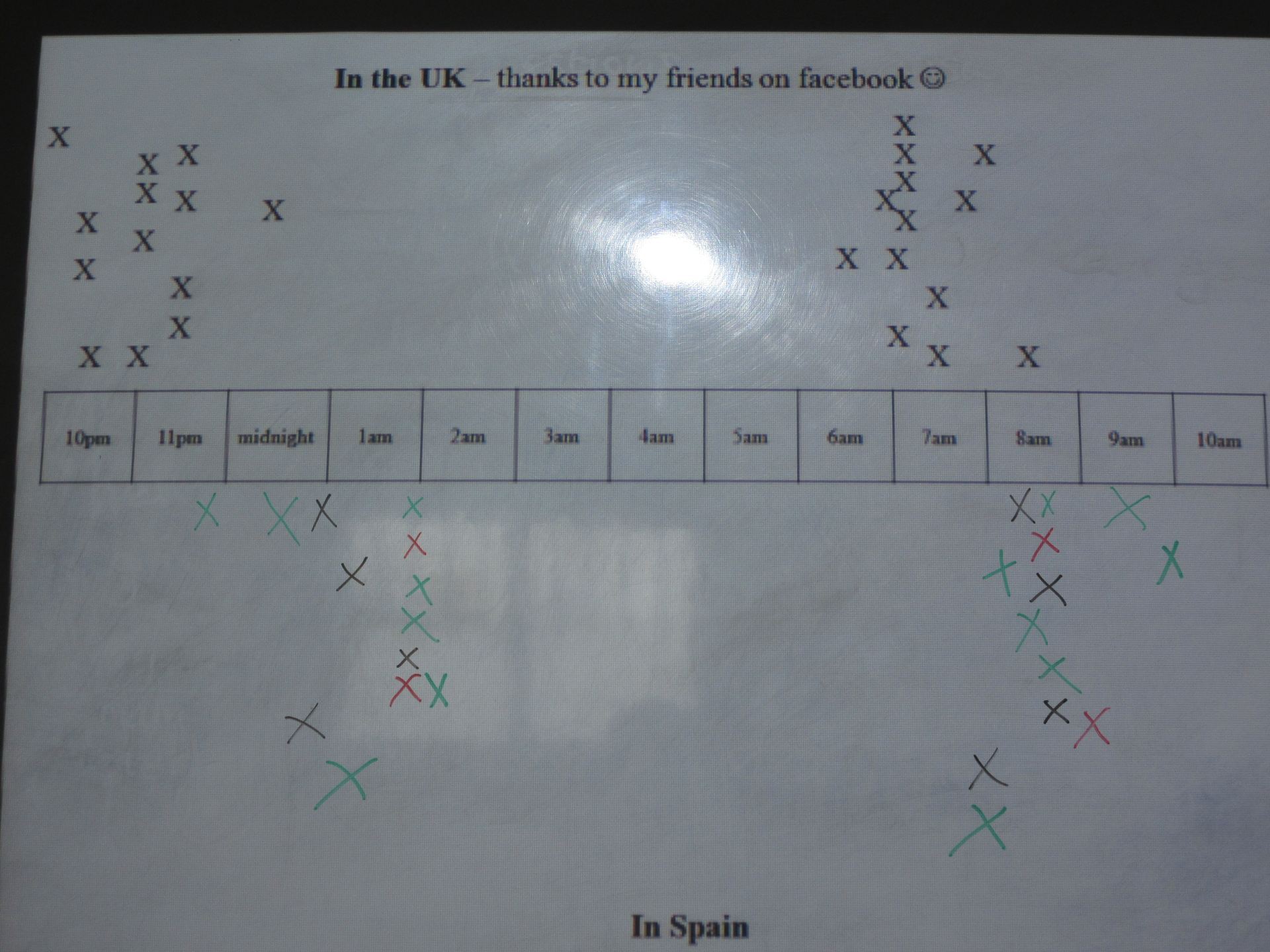 This then led on to reading a shortened, graded version of this text from The Guardian, which explains that Spain is in the wrong time zone.  There was an activity to match some tricky lexis from the text to definitions and while I’d originally planned for learners to share their opinion on the text (similar to the video – what did you find interesting or surprising?), I felt that because of the shift in level, the group would benefit from a more structured comprehension/reaction-to-the-text task, so I wrote some statements from the text on the board and asked them to discuss whether they were true.

The reading text led on to the final task – a debate.  I divided the group into two, mixing up learners a little so that a) the original three members were split up, b) there was an even number of stronger/weaker learners in each group and c) the stronger learners who had supported their weaker peers before were paired with someone different.  Group A had to discuss reasons why they thought Spain should change its time zone; group B had to discuss why they felt Spain should stay in its current time zone – I had prepared some points for each group to think about such as how the change might affect businesses or Spanish traditions, amongst others.  After a few minutes to get some ideas together, we did a quick task to look at language of agreeing/disagreeing and then mixed up the groups so learners could debate whether or not to change time zone.  Although I was happy with this final stage, I feel that it would have been more successful if I had made everyone in groups A and B to make notes as then I could have paired people off to debate.  As it was, in group B, only one person had made notes – as I felt that the weaker learners in that group would feel very uncomfortable doing the debate task with no support, I decided to have two people from each group against two from the other, which inevitably meant that some people spoke more than others.

So, what did I learn from this lesson?

I think the main tip I’ve taken away is to plan lower rather than higher for a first lesson with (what could be) an unfamiliar group as it’s much easier to extend simple tasks for stronger learners than it is to adapt materials on-the-spot for weaker learners.

2 thoughts on “Sleeping in”