I’m not a fan of games where people get eliminated – both in terms of the group dynamic and linguistic production.  Here’s a quick five-minute filler which will hopefully ensure learners avoid elimination.

Everyone stands in a circle and the lexical topic is chosen, for example food.  Go round in a circle naming food; if somebody repeats or takes too long to think, they go down on one knee. If they forget again, they go down on the other knee – as I use this game just in the last minutes of class, it’s always been time to go before anyone has actually got to that stage.  Another option could be that if someone is down on one knee and provides a correct answer, they can stand up again.

I’m having a bit of a tidy-up and came across the little book of useful notes I made to help me revise for my Diploma exam.  There were a few pages dedicated to problems which Spanish speakers can have:

There is a fabulous section in the book Learner English (Michael Swan and Bernard Smith) which has further information on speakers of Spanish and a wide variety of other languages.

I did a fun activity with the B2 group today – a game taken from Straightforward Upper-Intermediate which practises word formation. 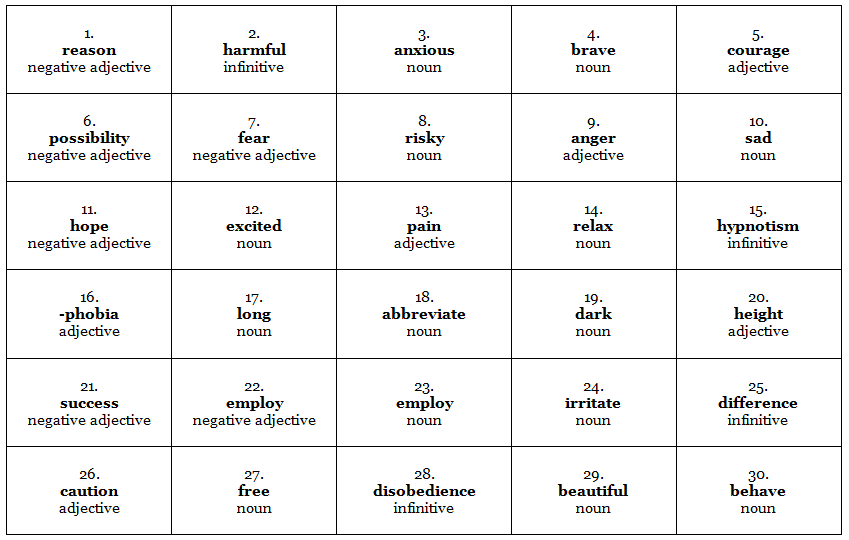 Each group of two or three students has a question board and there is a questionmaster who has the answer sheet.  The object of the game is to get for boxes in a row (horizontally, vertically or diagonally).  Learners choose a square and must produce the correct form of the word given; if they’re correct, they win the square and can colour it in.

Use of English activities can sometimes be a little dry and although this has the disadvantage of not showing the word in context (which goes a long way to helping identify the form of the word needed in the exam), it does make for an enjoyable, competitive way to practise this skill.

I was feeling a bit uninspired the other day before my S2 and S3 classes (6 and 7 year olds)…I could feel that the learners, especially in the S2 class, were getting a little tired of the same old revision activities with flashcards.  So I went through to Chris‘ class and started thinking about games I’d done in the past to review lexis and then asked him for some more ideas.  This is the list we came up with in a couple of minutes…

Secret Code: put three flashcards on the board facedown and tell the class which lexical set each one comes from.  Learners then guess the code.  With VYLs, I do it like this; with YLs you can give them ticks when they guess one or two correctly…but not say which word was correct.  A disadvantage to this game is that it doesn’t encourage or really allow space for BIG language, just single lexical items.

Board Slap: I still haven’t invested in fly swatters, although I see a number of my colleagues have.  There are a number of varieties for Vocabulary Slaps – again though I feel it doesn’t provide learners with the opportunity for BIG language.

Shark: This is actually a favourite in most of my classes…with each incorrect guess the man drops down a step.  Will the class guess the word and save him?  (Although there are groups who actually lose on purpose so the poor chap gets eaten! )

Teacher, stop!: In this activity the teacher shuffles through the flashcards facedown until one learner says, “Teacher, stop!” and then asks, “Have you got…?”  This activity could easily be adapted to allow for a greater range of language.  For example, when working with animals learners could ask a question about the animal such as “Has it got four legs?” or “Does it live in the jungle?”

On your head: VYLs especially like this activity because it shows that they know the vocabulary better than the teacher!  Shuffle through the cards then hold one up (above your head) and make a sentence about it…at the most basic lvel this would be, “It’s a pencil.” The learners then respond either with “Yes, it is” or “Yes, you’re right” or, as is more commonly the case, “No, it isn’t” with varying amounts of laughter followed by a correct sentence about the flashcard.

Describing: Another activity which works better with some lexical sets than others – choose one flashcard and describe it; learners guess what it is from the description.

Circle Drill: Although we often associate drills with phonology, they can be useful with flashcards to help learners remember less frequent or more complex lexis.  Choose the flashcards which learners are having most difficulty remembering and then pass them round in a circle, ensuring the learner says the word as they have the card.  To add a bit of mayhem, have a number of cards going in opposite directions.

Pasapalabra: An activity adapted from a Spanish TV show, both classes really enjoyed playing this on Thursday.  Choose 8-10 flashcards from different lexical sets and then put them in a pile facedown.  This is an individual activity, but it’s important for the others in the group to be attentive as it’s being played.  Choose which learner is going first and hold up the first flashcard; if they say the correct word, move on to the next and so on.  If they say the wrong word, play passes to the next learner and you start from the beginning.  Again, this is good for discrete items.

With all the activities above, after modelling how it is played, a learner can become “Question Master” with guidance from the teacher.

Target: Stick four flashcards to the board, one in each corner.  The first learner makes a sentence about one of the flashcards and if their sentence is correct, they try to hit the flashcard with a ball.  If they hit it, they win the card and play passes to the next learner.  This activity encourages learners to move beyond single words and becomes even more demanding if learners aren’t allowed to repeat the same sentence throughout the game.

This last activity can be adapted to play with higher levels and is especially useful for learners preparing for Cambridge PET in which they have to describe a photo.  For each flashcard, learner must introduce their sentence describing the location of the flashcard on the board.  For example, “In the bottom left there’s a camel.”

Not an existentialist question, but a quick filler which my colleague Nico shared at TEFL del Sur’s Swap Shop. An easy way to practise prepositions of place and classroom vocabulary with YLs – very useful for the Cambridge Exams, especially at Starters level where learners have to place objects on a picture card.

Learners describe their current position in relation to the class and their classmates.  For example,

I’m sitting next to Laura.

I’m opposite the teacher.

I’m under the projector.

I’m on a blue chair.