It’s sometimes hard with classes, especially of adults, to practise pronunciation of key sounds without it becoming a monotonous stage of drilling.  An exciting way to practise two similar sounds is by doing the following section of a lesson:

1. Write on the board in two columns a number of words which have the key sounds.  This works especially well if they are minimal pairs, but it’s also good to include spellings which don’t visually relate to the sound. Let’s use the example of /s/ and /ʃ /.

Point at each word so that students say them.  Correct any pronunciation problems at this stage and drill briefly.

2. Divide the class into groups and give each group a series of cards with a word on each.  Tell them to divide the words into two columns: those with /s/ and those with /ʃ /.  Feedback as a class by asking students to tell you which words are in each column – this will again give you a chance to check pronunciation and you can drill any difficulties.

3. Give each group a larger card with the phoneme on it and model the next activity.  Put the cards face-down on the table, pick one and read it, telling students to slap the correct sound.  Students then play in groups.  This activity provides an opportunity for students to peer-correct both the speaker and the “slappers”, whilst you monitor.

People in Andalucía speak very quickly – I’ve even heard stories of students who have gone to Madrid or the north of Spain and people who speak the same language have said they don’t understand and asked if the southerner could speak slower.  A common pronunciation issue in our classes is the dropping of final letters, for example in 3rd person singular in the present tense – an isue which also exists when Andalusians speak Spanish.  Whether it’s related to the speed at which they speak, I don’t know, but my mind wandered today towards the question, “Does the final letter really matter?”

Yesterday I play football an I watch The Simpson.  I ha pizza an chip for dinner an I wen to bed a ten o’clo.

Thinking purely in terms of effective communication, I would say this is comprehensible both written and spoken.  Fair enough, you might smile and say, “Only one chip?” but the message is communicated.  Also, I think that a lot of the errors above would not occur in writing: “play” and “watch” may not have been put in the past tense when writing and perhaps the student would write “chip” as a singular noun, but I think that generally speaking, the rest are pronunciation errors more than anything else.

In my opinion, the question we should also ask is what our students are going to do with their English – for those travelling to foreign countries for short holidays, an imperfect pronunciation of this style would not, I believe, cause any great problems.  Obviously students who are studying for external exams or who need English for a professional purpose would need to be more thoroughly corrected.

What do you think?

A fun game to practise word stress with any age is to stand students in a circle and ask each to choose a different word with more than one syllable on a given vocabulary topic, e.g. fruit.

Ask each student to say their word, to ensure all are different, and then ask them to clap-slap the word, slapping thighs for the unstressed syllables and clapping for the stressed one: ba-NA-na, STRAW-be-rry, av-o-CA-do.

Then one person has to clap-slap their word and pass to a classmate by clap-slapping theirs.  It’s as much a memory game as a practice of word stress, but either way, a fun five-minute activity to end the lesson.

Well, I’m getting ready to do /fənɒləʤi: wʌn ɪntrədʌkʃn ‿ən kɒnsənənts/ – the first of six input sessions on the TESOL course about phonology.  It’s going to be an odd session, as there are at least three trainees in the room who I think know more about phonology than me, as they have studied it at university.  It’s going to be a bit of a walk in the park for them, but I’ll be making the most of their expertise.  For the others, who have little or no knowledge of the phonemic alphabet, it will be an opportunity to get to know it.

If you feel you need extra help with fənɒləʤi: why not check out the Cambridge English Online website, where they have a great variety of activities to help you and your students get to grips with it all! 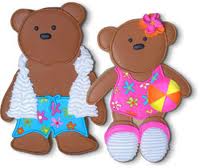 Classroom sweeps are a fun way to practise minimal pairs, or any other activity where there’s a choice of two answers.  Having decided what minimal pairs you’ll be focusing on, for example /ɪ/ and /i:/, get the students to stand in the middle of the room.  Explain that they must run to the left wall if they hear a word with the /ɪ/ sound and to the right if they hear the /i:/ sound.

You can also do classroom sweeps with more than two options – just be careful where you’re standing or you might get knocked over in the rush!