Reflecting on a new direction

I feel like I’ve learnt a lot about myself this year and perhaps one of the most important things I’ve learnt is that it’s OK to say no.  I’ve found in the past that I’ve often said yes to things because something needed doing or somebody suggested I do something, without really thinking it through, which frequently leads to me taking on more than I should (plus the fact that I’m atrocious at delegating and a bit of a control-freak!).

So, in my new “me” mode, I decided to give up my role as academic coordinator, a position which I’ve held for a number of years.  My decision to give up my role as academic coordinator in my current school is a very selfish one, motivated by own needs rather than as a response to the job I’m doing. There are aspects of the role which I really enjoy, which are funnily enough the things which other people turn their noses up at: I love timetabling – it can be a bit of a headache, but I like the way things slot together; I’m happy slogging away on the computer sending emails, curating our online staffroom or creating videos for Youtube. In fact, the aspect of my role which I have most difficulty with is the human factor – despite being a bubbly, friendly, chatty person I don’t actually enjoy having long conversations with people that much, especially when they’re tricky conversations, and I don’t feel I’m particularly good at them either.

Also, as another selfish streak shines through, I really want to focus my time and energy on MY teaching. The school where I currently work is an incredible environment for professional development – I’m surrounded by people who are actively working to become better teachers, who are enthusiastic about sharing ideas and who, generally speaking, are long-term ELTers who love what they do.  I’m also back on twitter after a few years’ absence and it’s another great place to connect with teachers from around the world, pick up new ideas and share experiences.  There are so many fantastic resources which crop up there on a daily basis, ideas which come out of Active’s fortnightly professional development meetings and tips which pop up in conversations by the photocopier which I would LOVE to have more time to engage with.  I’m certainly not overworked in my current role, but I have a terrible sense of guilt when I know other people are working and I’m not (even though it’s my scheduled time off) and so I know I work more than I should as I’m also not very good at dividing my time clearly or switching off from “academic coordinator” mode – so I’ll often have my email open when I’m doing other things on the computer (I think I also inherited a gossipy streak from my maternal grandmother so I always worry I’m missing out on something!).

I think as well, that when I first became a teacher, it seemed like “up” was the natural direction things moved – I imagined that I would be a teacher, then a DoS, then open my own school and it was only when I’d been teaching for a couple of years that I realised I didn’t want to own my own school.   Returning to being “just” a teacher for me is certainly no step backwards, rather I see it as the opportunity to step sideways in many different directions as I have more space and time to focus my energies on my development.  Here are just a few of the things I’m looking forward to experimenting with…

I’m feeling incredibly excited, motivated and energised by the change and hopefully, I’ll also be blogging more so you’ll get to hear all about it!

Category: My thoughts | 6 Comments on Reflecting on a new direction

One of the wonderful things about self-observation is that it can be a less stressful experience for the observee and provide a more realisitic view of the lesson itself.  As Wragg says, “the very presence of an additional adult who is not normally present may itself influence what happens” (1999:15) and I’ve often found during traditional observations that aspects of the lesson I had been asked to focus on were less apparent because of my presence in the room.  Most recently, I observed a colleague who was working with a challenging group of adolescents who frequently used L1 during lessons.  Throughout my observation, their use of L1 was minimal and, in fact, I was amazed at the amount of English they were producing, both in response to tasks set by the teacher and in their interactions.  In our post-observation feedback, we joked about how that was an incredibly atypical lesson, though I suggested that the teacher comment on it to the learners, to show them that they are capable of minimal L1 use.  She did, and their response was, “We were only doing it for your benefit because we knew she’d come to watch you teach.”

Another benefit of self-observation is that it doesn’t need to be timetabled in beforehand, as a traditional observation often is.  For example, you may be thinking of focussing on a particular learner within a group and, inevitably, when a traditional observation is scheduled, that learner doesn’t come to class that day.  And, speaking of focus, a self-observation gives you the opportunity to concentrate on a particular stage in the lesson – as though it’s useful to view the lesson as a whole, you may be more interested in looking at how effective your instructions were for a specific activity, how the learners interacted during a communicative task or how clear your boardwork was after presenting a grammar point. 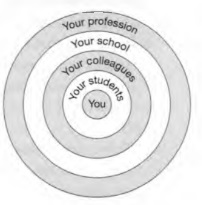 In The Developing Teacher, Foord shows us the five circles of development and states that a good reason for focussing on ‘you’ may be that you work alone, in which case self-observation is perhaps the only option available to you.  However, whatever your working environment, he recommends using self-observation as a development tool as part of your routine and provides a wonderful starting point with “Mirror, mirror” (2009:32).

Richard Whiteside, a former colleague, wrote a post on self-observation prior to our school’s implementation of them a number of years ago and he makes a good point that self-observation can be done at any point during the year.  We all generally reflect on our classes at the end of the day, but by ‘formalising the process’ we add further weight to it and teachers will gain benefit from it in a different way.  Talking through a lesson with a ‘critical friend’ either before or after the event will allow you space to reflect on stages, activities, interactions and many other features of the lesson and will perhaps bring up questions which you would not have thought of if reflecting alone.

Affect in the EFL classroom

Some more wise words from my colleague, Jill: “Lower the filter, not the bar.”

In our Professional Development Meeting on Friday, one of my colleagues, Chris, gave a fabulous session on ELT Methodologies.  The session was wonderfully presented as he modelled a number of techniques from various approaches/methods which most of us are familiar with from our own teaching experiences, although we may not be aware of where they originally come from.  We then had a brief look at some of the major approaches and methods in the area of ELT and finally looked at some statements regarding our own teaching and considered which methodologies the statements might relate to.

One of the statements got Jill and I talking about lowering the affective filter, which is often associated with Suggestopedia and we talked about how a teacher’s personality can go a long way in making learners feel comfortable, especially around making mistakes.  I praised her for her diligence in expecting and getting the most from learners and said how I felt she always managed to do so without making them feel uncomfortable and from there comes the quote of the day, “Lower the filter, not the bar.”

Having a bit of a sort-out today and came across my notes from JJ Wilson‘s opening plenary at ACEIA back in November.  It was a wonderful start to the day – a refreshing look at how we can develop with some engaging tasks to invigorate.

So, here were the ideas from the talk:

He asked us to complete the following sentences, with my answers at the time in brackets:

He suggested we look at where we are as teachers at different points:

Finally, we were asked for a seven-word piece of advice for new teachers, which we then wrote on balloons and batted around the room.  Mine was:

As I said, it was a beautiful way to start the day as opening plenaries on a Saturday morning need to offer the participants with something fresh and energising.  I also loved his motto for facing a crisis: “What would Jeremy Harmer do?”

What have I learnt about teaching?

You have been a teacher of English as a Foreign or Second Language for at least two years now.  What are some of the most important things you have learned about teaching?  What advice would you give to a colleague who had just completed his/her Certificate and was beginning to teach?

One thing I have developed since becoming a teacher is a bank of five-minute activities and games to use in class.  I think it’s great for new teachers to build up their own collection of games early on in their careers as there are always moments when you need a quick activity – either because you don’t have enough time to do something you had planned, or just an activity to review something done that lesson.  I started my blog as a way of storing the ideas I had picked up over the years and refer back to it when I feel like I’m stuck doing the same activity.

I’ve also learnt the value of conferences and would encourage new teachers to attend events whenever possible.  Throughout the year we all need a bit of a boost and workshops and conferences are an excellent way of picking up new ideas, but also reaffirming that wnat we’re already doing is useful and valid.

It’s also important to share your experiences with others as we often have similar problems with classes (dynamics, use of L1, behaviour).  A new teacher may worry that it’s only happening to them, but as you talk to colleagues you find that there are similar issues in most classes and I’ve found that although you may not be able to solve a problem, by talking it through with a colleague you can find different ways of dealing with it.