Adapting the classics to lower levels

I started a new class yesterday – an A2 group, many of whom studied English many years ago at school or in the government-run language school.  I wanted to do some kind of a mingle as a getting-to-know-you activity and thought about doing a ‘Find someone who…’ activity.  However, when I was thinking about the actual development of the activity, I felt the mingle stage would be too heavily preluded by a stage on adapting the statements to questions and question formation, which led to doubts about whether we would get bogged down by different tenses and the use of auxiliaries and modals.  I was trying to think of a way in which I could adapt the activity so that learners would still get the communicative element of questioning different classmates, without the heavy grammatical focus beforehand. 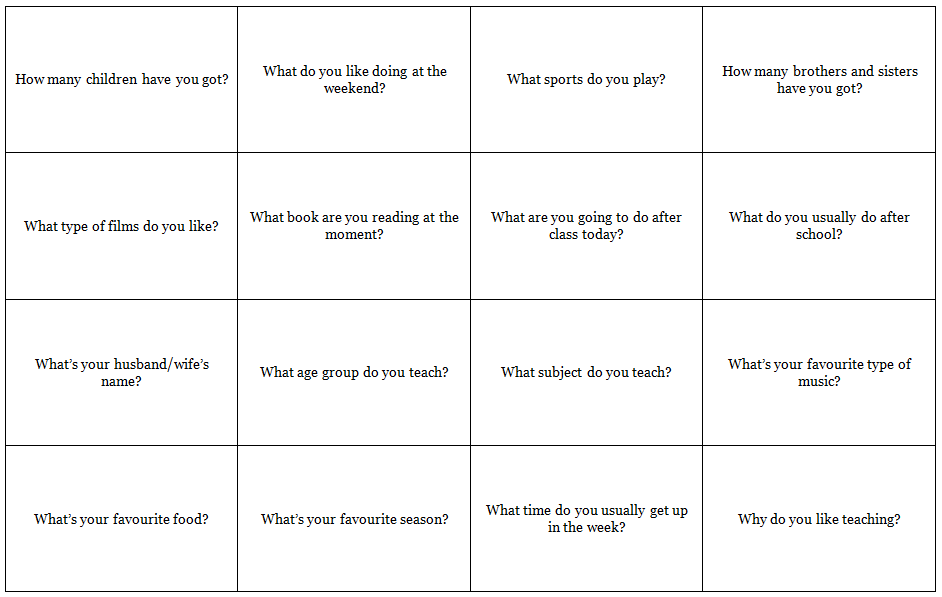 In the end, I opted for the following stages:
1. Prior to the lesson, print a number of cards with questions on
2. Give each learner four cards and tell them to write their answer, but not their name
3. Whilst they’re doing this, monitor to check everyone’s on task and help with any queries and at the same time, write up some difficult-to-pronounce lexis on the board (for my lesson this included usually, favourite, child/children and husband)
4. Take in their slips of paper and work through the lexis on the board – this was also an opportunity to check their knowledge, e.g. which other adverbs of frequency did they know
5. Give instructions for the next stage: learners will be given four cards and must find who each card belongs to. When they find the match, they should ask a follow-up question
6. After shuffling the cards, give each learner four cards, making sure they don’t have their own
7. Learners mingle – at this point you can either be involved if you’ve written on cards yourself or simply monitor
8. As a feedback activity, ask each learner to make a sentence about a classmate. You can also ask further follow-up questions
9. Do any error correction work which you picked up on during the activity or in feedback