I’ve come to realise that this is a useful column to have on the board when eliciting vocab from students…especially when you want them to use the vocab in a follow-up activity. 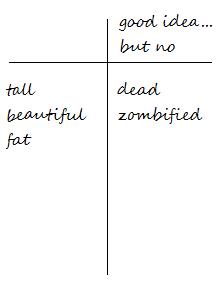 In a recent lesson, which was going to be focussing on comparatives, I first asked students to tell me some different adjectives.  The majority came up with the usual (tall, fat, beautiful) and then a couple of the boys were coming out with some great words (with a little bit of correction/tweaking from me), such as dead, zombified.

However, as they were going to be making comparative sentences in the next stage, I didn’t think “deader” and “more zombified” were particularly correct (as a concept, not grammatically speaking) and so I didn’t want to include them on the vocabulary lists.  But it seemed a shame not to encourage students to bring new ideas into the classroom and so I started a “Good idea…but no” column on the board and titled it as such.

I was able to explain why we couldn’t use the words for the next activity, but students could still see their ideas on the board and so felt encouraged and motivated.

1 thoughts on “Good idea…but no”