To be honest, I generally don’t like playing games with balls.  Not being particularly sporty as a child (or now in fact), I remember dropping balls and being hit by them more than actually catching them!  So I tend to avoid ball games in class. 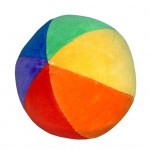 But here’s a fun five-minute game for the end of the lesson to review vocabulary and get students up and having a laugh.  Divide the class into two teams and have them stand opposite each other in a line.  Give them a topic, e.g. colours, and the first team says a colour then passes the ball to someone on the other team.  Play continues with the ball going back and forth until either a team can’t think of a word or repeats a word, in which case the round ends, a point is awarded to the other team and you start again with a new topic.

Other teachers I know say that the other team is awarded a point if someone drops the ball.  I tend not to play that way as it all gets a bit violent for my liking!

It works with all ages: I did animals, colours and clothes with the YLs, then up to Verbs beginning with s and geographical features with FCE adults.

Posted May 19, 2011 by Teresa Bestwick in category Vocabulary Activities