This week’s #ELTchat focussed on how we can build rapport with new groups.  Here are a number of the directions the chat took, some ideas for activities and links at the end to some articles which chatters shared.

Showing genuine interest was a key point which @SueAnnan raised, with @angelos_bollas adding that it was important to see each learner as a whole person – not just a student in your class.  @Marisa_C also pointed out that many coursebooks start with an introductory section with getting-to-know-you activities, but that it was important to find out what topics really interest YOUR learners. @AlexanderLDiaz said that after his learners have shared things about themselves, he also shares and that in order to help him learn names, he asks his students to suggest funny ways to help him, such as gestures.  I remember @nutrich doing an activity whereby each student thought of a meaningful word beginning with the same letter as their name – so I might be T-Rex Teresa because I love dinosaurs.

Learning students’ names, as well as pronouncing them correctly was also considered important and @MConca16 added that we should try to use their names as much as possible when nominating or addressing them – this helps both teacher and classmates to become familiar with each other’s names.  @GlenysHanson usually tosses a ball around when learning names as it’s more physical and laughter-producing.

@GlenysHanson queried whether anyone actually had a problem creating rapport.  She said that for her it wasn’t a problem, but she had to work on controlling loudmouths who weren’t listening to others.  @Marisa_C said that if a teacher has good communication skills, building relationships isn’t difficult.  We talked about whether it was more difficult to build rapport with adult learners – @jonjoTESOL said that his adult learners often don’t want to participate in rapport-building games because they don’t see the educational value of them.  However, even icebreakers can be a learning experience and @Marisa_C suggested choosing games with a clear and shareable language aim.  @jonjoTESOL added that another problem for adults is that they are more likely to remember the previous course’s introductory lesson and so become familiar and bored with the same activities.  @GlenysHanson said that she used more games with teen groups, but that for adult learners, she found that they became more talkative the less involved she was – to which @jonjoTESOL tweeted, A classic language learning technique – “teach yourself students whilst I pretend not to listen!”  @SueAnnan said communication from the outset was important with adult learners, as well as personalising the learning so it feels beneficial.

@MConca16 asked whether anybody did pre-course chats and there was some talk around needs analysis – why have they chosen to study English and what are their objectives are for the future.  She also takes notes on both the individuals and the group – which can be time-consuming but very valuable.

@SueAnnan uses interviews for learners to then feedback to the class on each other and @Marisa_C suggested using questionnaires or surveys.  She also plays The Name Game in which learners interview each other and have to guess their partners’ name, thinking about the associated attributes of the name, e.g. a Jane might seen as very different to a Georgia.  In terms of building class relationships, she gets learners to form groups/tribes which they name, e.g The Clever Six

@GlenysHanson said that after trying various activities, she tends to use the same three or four icebreakers, mixing the groups between each activity – Find someone who…, Find three things in common, 20 questions or True name, false profession.  And on the theme of true/false, @SueAnnan mentioned 4 truths and a lie.

@rapple18 suggested that in the second lesson, learners could sit in alphabetical order (to mix up seating) and remember one thing from the previous lesson’s getting-to-know-you activity about their partner to tell the class

What’s in a name in an ESL class? – from the blog of @cioccas

@Marisa_C recommends Classroom Dynamics by Jill Hadfield which has activities for lots of different language aims and posted a link to her article Storming out or norming in?

Icebreakers. Do we really need them? – shared by @GlenysHanson

Warmers, fillers, what on earth? – written by @chiasuan and shared by @fionaljp

Lesson plan: the first lesson with a new class – by @ELTideas and shared by @cioccas

Just to finish off, I love this tweet from @Liam_ELT: 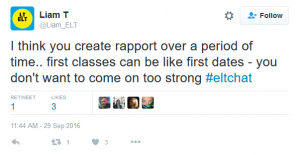